Slowdown in global demand? Depends on where!

More than 6 months ago, we pointed out the markets which did not seem to know the crisis: Brazil, China, Poland and Australia. Final data for 2011 seem to justify this claim, with the exception of Australia which has only seen a slowdown in its performance in the last 6 months. We do, however, a brief summary. The year 2011 has shown an increasing global demand for olive oil by almost 9 percent (see table below), reaching $ 4.5 billion.

But while the major world buyers (in the order Italy, USA, France and Germany) confirmed a trend almost similar to the dynamic of the world trend, in just three years Spain has become capable of disappearing from the top ten, losing as many as 6 positions Due to the severe economic crisis that is hitting hard the income of the inhabitants of the Iberian Peninsula. 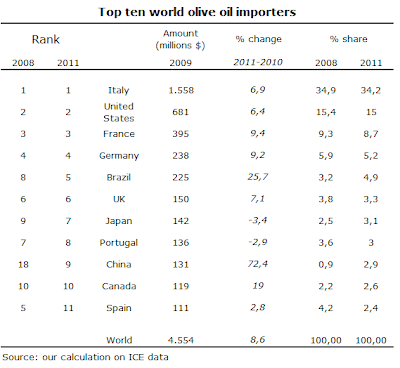 As announced previously in this special ranking, we find for the first time China, able to grow for the second consecutive year at a dizzying pace (+72% compared to 2010).
But, if the actual low overall weight of China (it has only 3% of world market), on the one hand it forces us to indicate that market as the "market of the future", from the other side it requires us, now, here, and immediately to tell you "attention ladies and gentlemen, listen very well, do you want to make money? The right market for you is the Brazil! "

The real star of 2011 is undoubtedly Brazil. It became the fifth buyer in the world olive oil market, now next to overcome Germany and with a positive trend that seems to know no any stops. Infact, even in 2012 it started with a boom: in the first two months of the year the trend growth rate was 21.6% (compared to the same month last year) with positive forecasts also for the other months of the year.

The main beneficiaries seem to be particularly Spanish and Portuguese companies. The latter have reached a market share of 50% of total Brazilian imports,  even if the strong economic crisis affecting the Iberian Peninsula could encourage the competitors with new and interesting opportunities. 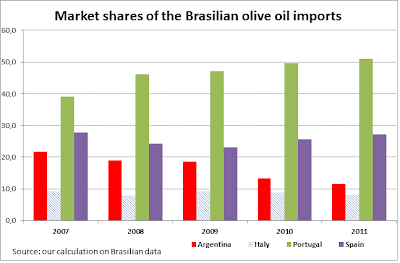