While we are here analyzing figures and data, companies, small business and Governments move their steps in the Asian olive oil market. Here some example, just to tickle your curiosity.

Some good impressions about olive oil consumption in Japan (from October 2009..), although not as grounded as a consumption analysis could be, can be found on Teatro Naturale, just click.

The Spanish Government went further. Spain is actually (March 2011) the larger exporters of olive oil in China - still we need to deepen the details. May be this leading position can be addressed to the Spanish Foreign Trade Institute, that created a dedicated website to promote Spanish olive oil in China (in Chinese and English). Check it out here. 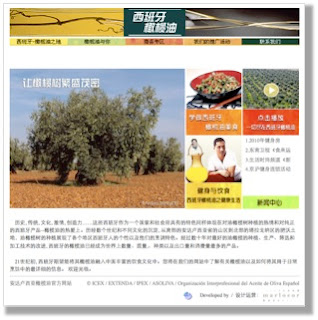 India, where all still have to come, starts showing interest toward olive oil. That's what the Press Trust of India, PTI, the largest press agency in India says.


"Driven by increasing health-food awareness in India, and aggressive marketing by various firms, Olive oil consumption in the country is likely to grow by over 5-fold to 25,000 tonnes in the next five years." "Olive oil consumption in India is growing at a fast pace in India as more and more people are switching to healthier foods. It is likely to grow over five fold by 2015," Indian Olive Association President V N Dalmia said.He said various Olive oil producing countries and marketing firms are investing in creating awareness about the oil in the country. "European Union, particularly Italy, has earmarked a budget of over 1.3 million euros, which will be spent in the next three years, for spreading awareness about the Olive oil in the country," Dalmia said. According to the Association, India's Olive oil consumption was around 2,600 tonnes in 2009 and is projected to cross 5,000 tonnes this year. "By mid-2010, the consumption had already crossed 2,600 tonnes and as the maximum growth is expected during the festive season, we are hopeful that it would easily cross 5,000 tonnes mark," he added. Besides, efforts are being made to grow Olives in India".

Just a "candy" to close with Inda: here a Spanish company exporting to India: what to say about it? We could start from the packaging.
As professionals all we can say is take this facts as they come: they are not based on reliable investigations, still they are representative of the dynamics in the Asian Olive Oil Market. We will do our best to support them with proofed analysis.
More to come.
a 01:33 Nessun commento:

We start today a new focus over the Asian olive oil market, namely imports.
If the early rise in olive oil consumption in the Asian Countries made this topic interesting, the latest events in Japan call for some further investigation. Although we do not have figures about organic olive oil, we believe these information can be of a real use also for organic producers and traders. Asia is not considered a producing area - we will come across it later - thus imports are a good aproximation of this market. 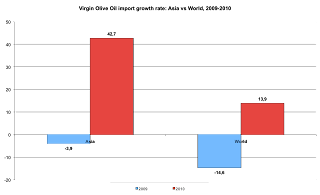 source: our calculation on Istat and ICE data.
a 02:02 Nessun commento: