Better than expected: the US Market for Olive Oil

In 2013, economic growth in the United States seems to become more consistent. The powerful monetary stimulus implemented from the Federal Reserve, on the one hand, is supporting domestic consumption, on the other is favoring the competitiveness of the domestic manufacturing firms due to the weakness of the dollar against other currencies, primarly versus euro (less than 10% during last year). The final result - waiting the "taperig" - is an higher than expected economic growth.
Also the olive oil market seems benefiting of this dynamic. The data on purchases of olive oil in the United States are positive: imports in the first six months of 2013 increased by 15%. The forecast for the next months seem to go in the same direction. If we observe the dynamic of the first 7 suppliers of olive oil (97% of the total purchases), we can deduce interesting news. The Italian exporters, holders of more than half of the US market, have increased their sales by 10%, losing market share, but less than their main European competitors (the spanish exporters -38%).  Among other eurozone countries only the greek exporters have been able to do better, increasing their sales by 67%,  "benefiting" of the austerity policy which saw reduce their internal costs.
In rapid recovery turn out to be the producers of North Africa (Morocco, Tunisia and Turkey too). The exporters of these countries continue to increase their market shares. But the question to ask is, are really products from these countries comparable with those Italians? Or is there such a difference in terms of quality, requiring to call in another way, the Italian olive oil? The U.S. market seems to tell us this: sell better, sell better products, sell even at a higher price .... because the consumers of that country are able to understand the differences and reward the quality! Italian extra virgin olive oil, the product of quality! 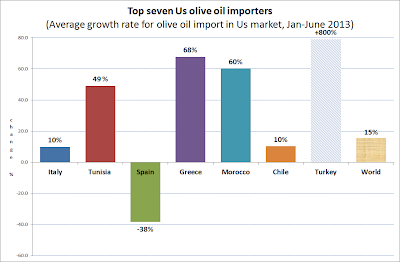