According to ISMEA - the Italian Institute for the Agro-food Market - the expanditure for organic olive oil in Italy rised by a +20% in the firs 9 months of 2010.

Generally speaking, the domestic purchases of organic food generally rised o+11% in the same period, mainly in the hypermarkets (+21,7%) while supermarkets decreased by a-1% compared to the same time frame in 2009.
Sells rised mainly in Southern Italy, the largest producer but the smaller retail market (Sicily +25,3%), folowed by the North-Eastern area (+15,4%), North-Western area (+9,7%) and the Central Italy (+3,3%).

Dear all, we are collecting data about organic olive oil prices worldwide.
Data are collected monthly using a short survey, starting from November 19th 2010.
We are asking to all our contacts to participate: producers, technicians, agronomists, olive oil tasters, traders, buyers, journalists, etc.

Please, help us and take the survey right now!
It takes just 2 mins.

Data will be published monthly - you can ask to receive a report.
a 02:59 Nessun commento:

Dear all, here you can find our estimantions for the organic olive oil production internationally in the latest years. Estimations are based upon data provided by several institutes, mainly Ifoam and Eurostat. 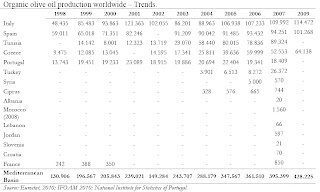