Figure 1
The March 2011 11th Tsunami's effects over the Japanese economy will wait no longer. The "disaster economics" analyists are not new to such forecasts, and they are setting the pace with the first figures. International trade exchanges, mainly for those sectors where the catastrophic event could have broken entire supply chains characterized by externalizations in foreign Countries are the most vulnerable (Escith et al., 2011). The virgin olive oil Japanese import (that includes also extravirgin with or without origin and/or organic certification) should not be affected. However, the willingness to pay for such product cold be affected by several other factors, such as emotional reactions, over-payed attention to more basic needs, reduced purchasing power, destruction of selling points or any other commercial and productive activities. Basically, it is too early to come out with a exaustive evaluation, since data actually stop at March 2011.
Nonetheless, we can say something. If since February 2011, the Japanese virgin olive oil import raised by 150 thousands euros, a deeper looks shows that import fall by the -13.6% comparing Jan-March 2011 with Jan-March 2010. But what kind of olive oil reaches the Japanese shelves? Well, it seems that the Japanese consumers and industry (especially cosmetic) are quite aware of quality issues. If we take the average unit value as an average price (that includes insurance and toll) it is still high, indicating a quite high quality product, although it fell down to 3.823 euros, -5.72% with respect the average price in 2010 (say 4.055 euros), and - 3.39% with respect Jan-March 2010. Import value and quantity fall down - following a negative trend begun almost a year ago (Figure 1) - as well as the average price, but the truth is hidden in the details. So, while we invite you to order (for free) our complete report, we signal the latest trends for the main exporters to the Japanese market: Italy, Spain and Turkey. Comparing the first three months of 2011 with the respectives in 2010, Italy is the only showing positive variation (+8.5%, see figure 2), while both Spain and Turkey lost some points (-12.2 and -2.1 respectively). 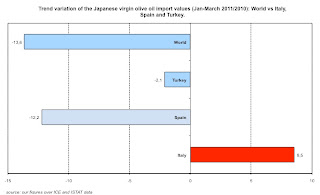 Figure 2
Figures and facts from our elaboration on ICE and ISTAT data.

This work is licensed under a Creative Commons Attribution 3.0 Unported License.
a 02:03 Nessun commento: